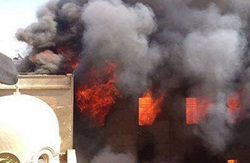 After weeks of rampages by the supporters of the ousted Islamist president, Mohamed Morsi, many Christian properties in Egypt were left in extreme disrepair. The attacks began on August 14th, shortly after Cairo police dispersed two pro-Morsi protest camps. Blaming Christians for requesting the police presence, the protesters fled to neighboring communities where they spray-painted Christian buildings with black "X" marks. Before emergency crews arrived, most of the marked buildings had been torched.

Some scholars believe this outrageous onslaught of violence represents the greatest attack on Egyptian Christians in 700 years. More than 30 Christian houses were set on fire. At least two Christian schools were attacked. When the Christ Soldiers orphanage was destroyed, about 200 children were left homeless. The assailants also burnt three branches of the Bible Society bookstore. In fact, all businesses having any
affiliation with Christians were in jeopardy.

The greatest level of damage, in both severity and scope, was inflicted on churches. More than 60 have been attacked, with varying degrees of damage. One of the most heavily damaged churches, the Amir Tadros church in Minya, was completely gutted. Engineers plan to demolish the building and, if adequate funding is available, hope to rebuild it. The congregation continues to meet at a nearby alcove at 6:30 a.m. when violence is less likely to occur. This is a valid concern considering that at least 500 civilians (along with 43 police officers) have lost their lives and thousands more have been injured. A brief four-minute video clip on this current situation is available on Persecution.TV. For a previous written report, you may click here.

In the midst of all the destruction and chaos, may God's peace reign supreme in the hearts of His people. For those who have tragically lost dear loved ones as a result of the vicious attacks, may His comforting presence be a reminder of the eternal promise that lies ahead. May these Egyptian believers continue to trust in God's sovereignty, remain obedient to His teachings, and be granted the grace to respond in a manner of love. Through the unwavering witness of Egypt's Christian community, and the workings of His Holy Spirit, may God work mightily in the country -- also touching the hearts of those committing the violent acts.

We invite you to join others in prayer for our fellow believers in Egypt by posting your prayers on our prayer wall.
NIGERIA: Minor Provocation Incites Muslim Mob
to Attack Church
Sources: Release International, Morningstar News 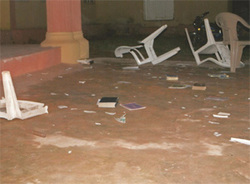 Several attendants of a church in Lafia, Nasarawa, were severely injured by a mob of Muslim militants in an attack that was prompted by an altercation over a miniscule amount of money. During the early evening of August 17th, while the choir was rehearsing, Rev. Isaac Onwusongaonye held a Bible study meeting with the elders of St. James Anglican Cathedral. At the time of the meeting, he was informed about a confrontation that took place at the church's water borehole. The confrontation led to a violent assault against the church building and those in it. Reportedly, a Muslim woman in the community had incited neighboring militants to attack the church after engaging in a minor dispute with a young Christian man who runs the borehole...over the payment of 20 naira, which is equivalent to about one cent (CAD) in change.

Despite the church's attempts to defuse the row by waiving the fee, the woman's son and associates responded with violence. Using knives, clubs, motorcycle chains, iron poles and wooden rods, the angry mob of 30 attacked the church's security guards, causing most of them to be hospitalized. In addition, three pastors, four elders, and an indeterminate number of choir members sustained injuries. Church property was also destroyed. Thankfully, the arrival of police averted plans to burn down the church building. While the ringleader's mother was initially arrested, she was later discharged in exchange for her son. The case is still under investigation. (For more information on persecution in this country, please check the Nigeria Country Report.)

Thank the Lord for the courage of the security guards who risked their lives while trying to protect the church. Pray that these guards and others who were wounded during the attack will not succumb to fear, but rather would set their eyes on our Almighty God as their Protector and Deliverer. Ask Him to minister to the traumatized victims, granting them needed comfort and healing. May the Lord encourage and reward the church’s leaders and congregation members, bringing justice in this situation and blessing their outreach in the community.
CHINA: House Church Pastor Attacked by
Government Agents
Sources: ChinaAid, Christian Solidarity Worldwide 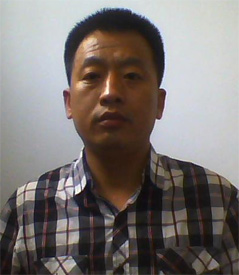 Li Shuangping, pastor of Linfen house church, was abducted, beaten and threatened by government agents on the night of August 13th. While Li was driving to his home in Shanxi province, a man who appeared to be drunk staggered in front of his vehicle, at which point Li stopped. A black sedan pulled up alongside Li, and three men hurried out. The men forcibly seized Li from his vehicle, with help from the man who pretended to be drunk, and dragged him into the sedan. As one man drove, the other three restrained and harassed him in the backseat. After blindfolding him and tying him with a rope, they beat him for the duration of the journey, inflicting noticeable wounds on his head, neck and torso. The driver strayed from the main roads until reaching a cornfield, where the other men pushed Li out of the sedan.

Throughout the journey, one man repeatedly threatened to kill Li for his involvement in the house church. The threats ranged from being tossed in the river to being forced to drink sulfuric acid. The man also threatened to track down and kidnap Li's family. The abducted pastor believes that the assailants work for the local government which has previously targeted him for his involvement with Linfen church.

In 2009, several hundred police officers raided the church, which regularly holds about 50,000 attendants. Bibles and areas of the building were damaged during the raid, and scores of parishioners were violently attacked. Some of the church leaders traveled to Beijing to file a formal complaint, but they were arrested and detained on the way. Li was released in July of 2011, along with several others. More detainees from Linfen church were released later, but some are still in custody, including Yang Rongli, who is serving a seven-year sentence. Learn more about the challenges facing Christians in China at the China Country Report.

Pray that Pastor Li and all those affected by the church raid will draw closer to the Lord and develop greater fervency in prayer. Ask Him to provide protection for these believers and their families, keeping them at peace and free from the spirit of fear. Also pray that the members of the Linfen house church will continue to gather together in fellowship to the glory of God, reaching multitudes more in China with the Gospel... including Li's abductors.