Healing from the Scars 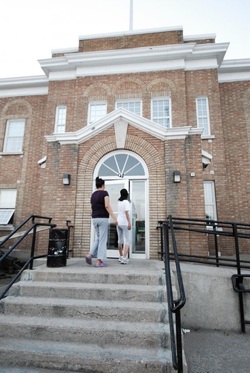 In the basement of the YWCA’s Our House on the corner of First Avenue and 15th Street East, Daphne* sits quietly. A neat pile of sage collected from Little Red smoulders in a bowl made from an ash tree, the remnants of a recent smudge.

She turned her last trick at the end of 2011, after 26 years on the streets. She tells her story.

“I let go of the chains and the handcuffs that I had always worn,” said Daphne. “My walls are down. And I know there’s a better way to life than prostitution and drugs and alcohol.

“The past is the past. I can’t change it, only live for today. And that’s what I learnt. And that’s what keeps me strong. And I know telling my story I can be helping one person and if it reaches one, then that’s all it is.”

Since street workers all face their own challenges when trying to escape, the help needs to be equally individualized.

“It’s just such a broad spectrum of things that we could never nail it down to ‘this is what’s happened, this is why it’s happening,’” said Angela Di Paolo with the Prince Albert Outreach.

“Every person’s different and we treat them all how they need to be treated - as an individual, as a person who has a story.”

They’ll refer them to various agencies, but each person also takes their own time to heal.

Daphne didn’t find it easy to get off the street. Seven months ago she was still working in Regina.

She found support, went to detox, then came to stay in Prince Albert.

“I had to leave Regina because I had a past there and I knew that it wasn’t healthy for me,” she said.

Seven months later she’s walking around 13th Street, explaining how the stroll works. Daphne said she was surprised at how easy it was to jump back into the mindset of a prostitute on that street, but she doesn’t see herself getting back into the trade.

She’s found a bed at YWCA’s Our House, where people support her. The staff there are trying to make it possible for women in Prince Albert to have a choice, starting by meeting their basic needs.

“We’re providing a safe shelter, providing current unemployment programs. Helping them choose a different lifestyle, referring them to counselling. Just doing what we can do to empower them to get out of the sex trade,” she said.

They also advocate to the government and the public about exploitation of women. For the most part, she thinks the government recognizes social problems.

“But every agency runs into (issues) where they don’t have enough staff to address all the problems,” she said. “Ensuring that non-profits and even the health care system, ensuring that there is enough funding in place so a proper amount of staff can be hired to address the issues.”

She applied her next piece of advice to all members of government and the general public.

“Educate yourself about it. Look it up, find the reasons for it, and go out there and support programs that help women, help children, help youth.”

Daphne got accepted into SUNTEP in Prince Albert, a Bachelor of Education program, and will start in September.

She’s telling her story to let people know the truth while she begins her healing process.

“That could be their grand-daughter, or their daughter, their aunty, their wife,” she said.

“They don’t know until they walk a mile in that girl’s shoes. Some of them, it’s not their choice. And we are humans so we should not be so judgemental, regardless of the status of that person working the streets.”