Eve - Mother of All the Living

Eve was the first woman and the first mother. Without a single role model or mentor, she paved the maternal way to become "Mother of All the Living." She and her mate Adam lived in Paradise, but they spoiled it by listening to Satan instead of God. Eve suffered terrible grief when her son Cain murdered his brother Abel, yet despite these tragedies, Eve went on to fulfill her part in God's plan of populating the Earth.

Sarah was one of the most important women in the Bible. She was the wife of Abraham, which made her the mother of the nation of Israel. Yet Sarah was barren. She conceived through a miracle in spite of her old age. Sarah was a good wife, a loyal helper and builder with Abraham. Her faith serves as a shining example for every person who has to wait on God to act.

Rebekah, like her mother-in-law Sarah, was barren. When her husband Isaac prayed for her, God opened Rebekah's womb and she conceived and gave birth to twin sons, Esau and Jacob. During an age when women were typically submissive, Rebekah was quite assertive. At times Rebekah took matters into her own hands. Sometimes that worked out, but it also resulted in disastrous consequences. 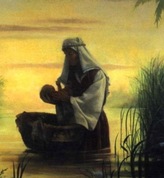 Jochebed, the mother of Moses, is one of the under appreciated mothers in the Bible, yet she also showed tremendous faith in God. To avoid the mass slaughter of Hebrew boys, she set her baby adrift in the Nile River, hoping someone would find him and raise him. God so worked that her baby was found by Pharaoh's daughter. Jochebed even became her own son's nurse. God used Moses mightily, to free the Hebrew people from their 400 year bondage of slavery and take them to the promised land. Although little is written about Jochebed in the Bible, her story speaks powerfully to mothers of today.

Hannah - Mother of Samuel the Prophet

Hannah's story is one of the most touching in the entire Bible. Like several other mothers in the Bible, she knew what it meant to suffer long years of barrenness. In Hannah's case she was cruelly taunted by her husband's other wife. But Hannah never gave up on God. Finally her heartfelt prayers were answered. She gave birth to a son, Samuel, then did something entirely selfless to honor her promise to God. God favored Hannah with five more children, bringing great blessing to her life.

Wife of Elimelech and mother-in-law of Ruth. She went with her husband to the land of Moab, and after his death returned to Bethlehem. When greeted on her return, she told the women of the town to call her, not no`omi ("pleasantness"), but marah ("bitterness"), "for," she said, "the Almighty hath dealt very bitterly with me." She advised Ruth in her dealings with Boaz, and afterward nursed their child.

Ruth was a woman from Moab who was first married to Mahlon of Judah. She was widowed. Her mother-in-law, Naomi, returned to her homeland and Ruth accompanied her. Naomi urged Ruth to return to her own people and god. In Bethlehem, Ruth married a relative of Naomi's named Boaz. In this way, the gentile Ruth became part of the heritage of Christ himself. She subsequently became the mother of Obed, the grandmother of Jesse, and the great-grandmother of King David.

Bathsheba was the object of King David's lust. David even arranged to have her husband Uriah the Hittite killed to get him out of the way. God was so displeased with David's actions that he struck dead the baby from that union. In spite of heartbreaking circumstances, Bathsheba remained loyal to David. Their next son, Solomon, was loved by God and grew up to become Israel's greatest king. From David's line would come Jesus Christ, the Savior of the World. And Bathsheba would have the distinguished honor of being one of only five women listed in Messiah's ancestry.

Elizabeth - Mother of John the Baptist

Barren in her old age, Elizabeth was another of the miracle mothers in the Bible. She conceived and gave birth to a son. She and her husband named him John, as an angel had instructed. Like Hannah before her, she dedicated her son to God, and like Hannah's son, he also became a great prophet, John the Baptist. Elizabeth's joy was complete when her relative Mary visited her, pregnant with the future Savior of the World.

Mary was the most honored mother in the Bible, the human mother of Jesus, who saved the world from its sins. Although she was only a young, humble peasant, Mary accepted God's will for her life. She suffered enormous shame and pain, yet never doubted her Son for a moment. Mary stands as highly favored by God, a shining example of obedience and submission to the Father's will.