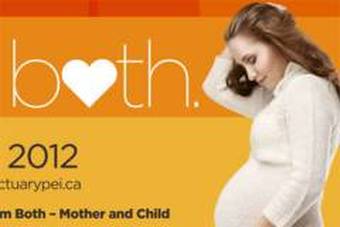 Pro-abortion activists eager to join Saturday’s demonstration in favor of bringing abortion into the abortion-free Canadian province of Prince Edward Island, were greeted with a sobering sight when they opened that day’s newspaper – a full page pro-life ad informing islanders of the various ways that abortion “harms women.”

Ann Marie Tomlins, spokesperson of the PEI Right to Life Association, which sponsored the ad, told reporters that the “goal of the ad campaign is to inform Prince Edward Islander’s about the truth about abortion.”

“The ad was designed to address why women have abortions and what the consequences of abortion are to women,” she said.
The ad features a beautiful woman wearing a form-fitting white sweater that showcases her pregnant belly. “Love them Both,” reads the title. The ad goes on to provide a variety of facts and figures arguing that women are often coerced into having abortions, and often suffer various ill effects. It also outlines various ways that politicians, schools, doctors and “pro-woman advocates” can help create a culture of life.

Prince Edward Island remains the last of Canada’s provinces where lack of access to abortion offers some form of protection to babies in the womb. The Island government, however, does cover the cost of out-of-province abortions.
Tomlins said that the PEI Right to Life Association decided to run the ad after Richard Raiswell, a professor from the University of PEI, gave a commentary on CBC last week arguing that abortion is a “medically necessary essential health care service, one to which all Canadian women have a right under the Canada health act.” Tomlins said that her association ran the ad on Saturday because “that day gets the best distribution.”

“We did not know at that time that there was going to be a pro-abortion rally,” she said. “It turned out that our timing was perfect. We didn’t know, but God did.”

Approximately 75 pro-abortion demonstrators marched in Charlottetown Saturday in an effort to sway public opinion and politicians in favor of bringing abortion to PEI.

However, PEI health minister Doug Currie pledged last December to keep the province abortion-free, telling The Guardian at that time that he saw “no reason to veer off the current status. I see nothing changing and the status quo is in place and that’s my position on it right now.”

Tomlins said that her association will continue to inform the islanders on the issue of abortion with more newspaper ads in the planning and perhaps an upcoming TV commercial.

“We will certainly be keeping the issue of abortion in the forefront here,” she said.