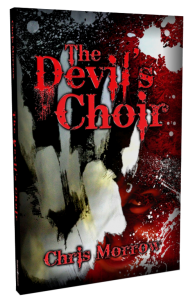 Athanatos Christian Ministries, a Christian apologetics and publishing ministry, has a surprise for Christian readers. On October 24th, just in time for Halloween, they will release "The Devil's Choir," by Chris Morrow. One does not usually associate Christian authors with the horror genre, but ACM's director, Anthony Horvath, can explain.

Horvath says, "From the horrors of the Holocaust to abortion on demand to any number of incidents in human history, there is much to terrify us--about ourselves. Add to that the reality of the supernatural, and I think it is safe to say that there is a sense in which we ignore the 'horror genre' at our peril. It's clear that as Christians, we cannot follow Stephen King wherever he goes, but at the same time, the real world is often a terrible place, and Christians need to wrestle with that fact and its implications."

"The Devil's Choir," will be released first as an ebook with a print edition due out on January 18th, 2013.

Chris Morrow is an up and coming horror author whose short stories and novellas have appeared in numerous print and online magazines and anthologies. "The Devil's Choir," his first novel length release, retains his unique style-a style that keeps readers sleeping with the lights on, but also incorporates elements of the traditional mystery/thriller in concert with an overriding Christian worldview.

"Sometimes people raise an eyebrow when I tell them I'm a Christian horror writer," says Morrow, "but the truth is that we live in a pretty scary world. And honestly, if there is anyone who should be open to the existence of supernatural evil, it's Christians. The Bible is full of it."

Morrow shares, "The story revolves around two primary characters, Melanie Elarton, a young college student with some unique abilities, and Ari, an investigator with an interesting past. The bulk of the story takes place in present day in a small town in rural Kansas. The story comes to a head on the night of the town's annual Halloween masquerade ball."

Morrow is one of the authors in the Bard and Book community, the home of some of his other short stories in the horror genre.