_The Power of Letters
by: Melissa Wallace 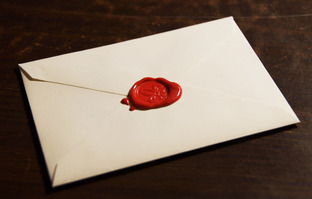 When I was younger I gobbled up books like candy. One series—called "Pen Pals" by Sharon Dennis Wyeth—came with a form you could complete and send away for your very own pen pal. So I did and soon I was writing regularly to a girl from Oklahoma City who, like me, was in grade six and eager to share her life.

She would draw all over the envelopes, making extraordinary designs that I admired. We also exchanged photos. The first gift we gave each other was a 25-cent coin in our own currency. I thought it was so fascinating to have my very own U.S. coin.

My pen pal and I lost touch in university and then recently reconnected by email. She is now an artist who sells her drawings for thousands of dollars. I have held on to her letters and envelopes all this time and am sure her fans would pay a pretty penny for them. But to me, these letters are priceless. They represent pieces of my childhood and no doubt contributed to my decision to turn writing into a career.

Letters can mean a great deal. I recently returned from a weeklong trip to Asunción, Paraguay with Christian Children's Fund of Canada (CCFC), which helps children in developing countries through its sponsorship program.

On this trip, I met Braulio, a 23-year-old student who used to be sponsored and is now studying biology in university. He showed me letters and photos that he started receiving from his Canadian sponsors when he was only 13.

"In one of my letters, my sponsor wrote to never stop studying and acquire the greatest amount of education possible," said Braulio. "That always stayed with me in my mind and if I follow her words, I'll continue studying until I get my degree."

Braulio's community looked very different in the years before CCFC's arrival. People were disconnected from each other. Braulio's father was a general labourer who would take any job that came his way such as painting or laying brick while his mother was unemployed. Braulio admits his life was just about 'partying'. But when he became sponsored, he realized someone overseas cared about him. He was touched and encouraged that complete strangers took notice of him and began to value his education just as they did.

Braulio dreams of talking with his sponsors one day. He has saved everything they ever sent to him – even the wrappers from the candy he ate.

A handwritten letter shows kindness and care, beyond just the extra element of risking writer's cramp, tracking down an envelope and stamp, and trudging to a mailbox. It's an art form that can cross borders and break down walls. As Braulio and I will tell you, it can even change lives.