Who Was...
Stephen, The First Martyr 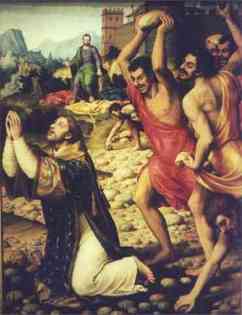 This morning we come to the short, but incredible life and ministry of Stephen. He is specifically marked as a man full of faith and of the Holy Spirit. This morning we will see that displayed in his incredible witness even in the face of persecution. As one writer commented, if Stephen had not been martyred, he would have been the one doing the things Paul ends up doing. Perhaps that is one reason this same passage also introduces us to Saul, who becomes the apostle Paul.

Recall that by this time the early church was now facing rising persecution as the chief priests, Sadducees and the Sanhedrin react negatively to the preaching of the gospel. And though the apostles have been flogged by them for proclaiming Jesus Christ, they continue preaching his death and resurrection along with performing many signs and wonders that authenticate their message.

The church had also grown so rapidly that the sheer logistics of trying to keep up with all the ministry gave rise to complaining and the start of a faction, but the apostles quickly handled the situation and had the congregation find seven men full of the Spirit and wisdom that they then appointed to the task. The complaining ceased and the church was again unified and as verse 7 states: "And the word of God kept on spreading; and the number of the disciples continued to increase greatly in Jerusalem, and a great many of the priests were becoming obedient to the faith."

The church continued to grow with even a large number of priests becoming followers of Jesus Christ. The church was bold and Stephen was one of the men at the forefront of declaring Christ.

And Stephen, full of grace and power, was performing great wonders and signs among the people. But some men from what was called the Synagogue of the Freedmen, [including] both Cyrenians and Alexandrians, and some from Cilicia and Asia, rose up and argued with Stephen. And [yet] they were unable to cope with the wisdom and the Spirit with which he was speaking. (Acts 6:8-10)

Stephen, who had personal charm and power, did great wonders and miracles among the people. Some belonging to the Synagogue of the Libyans, and Jews from Cyrene, Alexandria, Cilicia, and the province of Asia began to argue with Stephen; but they were unable to get the better of him because of the wisdom and spirit with which he spoke.

Then secretly they bribed certain men to say, "We have heard him speaking blasphemous words against Moses and God." In this way they stirred up the people, the elders and the scribes, so that they seized Stephen and took him before the council. They also brought in false witnesses who said, "This man is always talking against this holy place and the law. We have heard him say that this Jesus of Nazareth will destroy this place and change the customs which Moses handed down to us!"

Then all who were sitting in the council fixed their eyes on Stephen and saw that his face shone like the face of an angel. But the high priest said, "Are these charges true?" Stephen answered, "Brothers and fathers, listen. The Most High God does not live in houses made by men.

"You stubborn and evil-minded people! you always resist the Holy Spirit, as did your fathers before you. Which of the prophets did they not persecute? They also killed those who foretold the coming of the Just One, whose betrayers and murderers you have become--you who received the law given through angels, and have not kept it!"

When they heard these words, they were furious and gnashed their teeth at him. But Stephen, filled with the Holy Spirit, looked up into heaven and saw the glory of God, and Jesus standing at the right hand of God. "Look, I see heaven open," he said, "and the Son of Man standing at the right hand of God." But they stopped their ears and with a howl rushed at him all together. Then they threw him out of the city and stoned him. The witnesses who threw the first stones, laid their clothes at the feet of a young man named Saul. As they stoned Stephen, he prayed, "Lord, Jesus, receive my spirit!" Then he knelt down and cried aloud, "Lord, do not lay this sin to their charge!" When he had said this, he fell asleep. Certain devout men buried Stephen, mourning deeply for him.