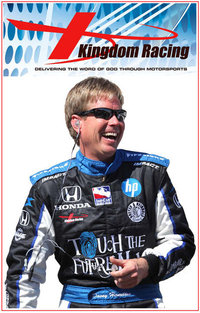 Kingdom Racing will compete in the full 2012 INDYCAR Series season races this year, including the famed Indianapolis 500 Mile Race on May 27, 2012. The team announced it will partner with Schmidt Hamilton Motorsports and the No. 77 HP Bowers & Wilkins Honda/Dallara piloted by driver Simon Pagenaud. "I'm very excited about the opportunity with Sam and HP and moving into the ownership role. I have every confidence in Simon being able to compete and contend for race wins. I am very confident about that," said Davey Hamilton. Added Sam Schmidt, "We couldn't be more pleased than to have a relationship in 2012 with Kingdom Racing. Obviously, I am a firm believer in their mission and sincerely hope we can add significant value and exposure to a combined program moving forward. There are also extreme ironies at work here such as my incident back in 2000, Davey's incident while driving for SSM in 2001, ensuing challenges which can only be overcome through faith, combined with George and Charles' commitment and dedication to fellowship through racing related programs, etc. Needless to say, the opportunities are endless and only restricted by one's imagination."

This year will mark Kingdom Racing's fifth appearance at the Indianapolis 500 and first full season of INDYCAR competition. "This is a benchmark year for Kingdom Racing, one that's been in the works for many years. We're definitely up to the challenge and couldn't be more honored to partner with Schmidt Hamilton Motorsports," said Team Director Charles West. As expected, Kingdom Racing will also expand its fan outreach lineup for 2012, which previously focused on ministry events held at Indianapolis and Texas. Said Kingdom Racing founder and owner George del Canto, "The original vision received seven years ago was to 'build an IndyCar team to deliver God's word through motorsports.' Well, through Schmidt Hamilton Motorsports, God has done it."

About Davey Hamilton:
Davey's racing career almost ended on June 9, 2001 following a devastating crash at the Texas Motor Speedway. After 23 operations and two years of rehabilitation, Davey returned to Indy Car racing at the 91st running of the Indianapolis 500 in May 2007 and finished 9th. Davey's strong faith and determination to once again race in the 500 were instrumental in securing a partnership with Kingdom Racing.

About Kingdom Racing:
The 2012 season marks a turning point for Kingdom Racing as it denotes our first full season of competitive association in the IZOD INDYCAR Series. "Let us run with patience the race that is set before us." Hebrews 12:1.

In 2008, Kingdom Racing made history as the first faith-vision team to compete in the Indianapolis 500. To date, we have four years of proven race performance with IZOD INDYCAR drivers Davey Hamilton and Martin Plowman. For 2012, Kingdom has joined forces with Schmidt Hamilton Motorsports and driver Simon Pagenaud. Our unique approach combines motorsports with Christian ministry and outreach. Our goal is to use INDYCAR racing as a platform to reach millions for Christ.

About Sam Schmidt Motorsports
Sam Schmidt Motorsports (SSM) was established in 2001 and is owned by former driver Sam Schmidt, who was paralyzed (quad) in 2000 after a testing accident at Walt Disney World Speedway in Orlando, Fla. As a car owner, Schmidt fields cars in the IZOD IndyCar Series, including the Indianapolis 500, and the Firestone Indy Lights championship. SSM is the most successful team in Indy Lights with 46 race wins and five championships. In addition, SSM has qualified 12 cars in the Indianapolis 500 since 2001 and, in 2011, won the coveted Indy 500 pole.