John: The Call to Believe
by: Connie Blackwood 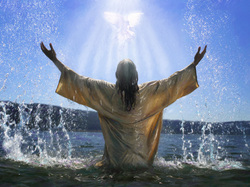 __John 20:30-31 - "Jesus did many other miraculous signs in the presence of his disciples, which are not recorded in this book. But these are written that you may believe that Jesus is the Christ, the Son of God, and that by believing you may have life in his name."

John used the word "believe" nearly one hundred times in this book. He calls us to faith in Jesus by believing. One of the most famous verses found in the Bible is John 3:16, which once again focuses on belief in Jesus. Jesus is the only one worthy of our complete trust.

The purpose of miracles is to believe.
John 2:11 - "This, the first of his miraculous signs, Jesus performed at Cana in Galilee. He thus revealed his glory, and his disciples put their faith in him."

John 2:23 - "Now while he was in Jerusalem at the Passover Feast, many people saw the miraculous signs he was doing and believed in his name."

John 4:53-54 - "Then the father realized that this was the exact time at which Jesus had said to him, 'Your son will live.' So he and all his household believed. This was the second miraculous sign that Jesus performed, having come from Judea to Galilee."

John 7:31 - "Still, many in the crowd put their faith in him. They said, 'When the Christ comes, will he do more miraculous signs than this man?'"

John 10:38 - "'But if I do it, even though you do not believe me, believe the miracles, that you may know and understand that the Father is in me, and I in the Father.'"

John 11:41-43 - "So they took away the stone. Then Jesus looked up and said, 'Father, I thank you that you have heard me. I knew that you always hear me, but I said this for the benefit of the people standing here, that they may believe that you sent me.' When he had said this, Jesus called in a loud voice, 'Lazarus, come out!'"

John 14:11 - "'Believe me when I say that I am in the Father and the Father is in me; or at least believe on the evidence of the miracles themselves.'"

The importance of belief in Jesus.
John 1:12 - "Yet to all who received him, to those who believed in his name, he gave the right to become children of God--"

John 3:36 - "'Whoever believes in the Son has eternal life, but whoever rejects the Son will not see life, for God’s wrath remains on him.'"

John 5:24 - "'I tell you the truth, whoever hears my word and believes him who sent me has eternal life and will not be condemned; he has crossed over from death to life.'"

John 6:40 - "'For my Father’s will is that everyone who looks to the Son and believes in him shall have eternal life, and I will raise him up at the last day.'"

John 12:36 - "'Put your trust in the light while you have it, so that you may become sons of light.' When he had finished speaking, Jesus left and hid himself from them."

John 19:35 - "The man who saw it has given testimony, and his testimony is true. He knows that he tells the truth, and he testifies so that you also may believe."

John records reprimands for lack of faith.
John 5:37-38 - "And the Father who sent me has himself testified concerning me. You have never heard his voice nor seen his form, nor does his word dwell in you, for you do not believe the one he sent."

John 5:46-47 - "'If you believed Moses, you would believe me, for he wrote about me. But since you do not believe what he wrote, how are you going to believe what I say?'"

John's challenge to us is to put our faith in Jesus who is the Christ, God's only Son.