__Did Christ at the Checkpoint Conference Undermine Israel?
by: Jennifer LeClaire 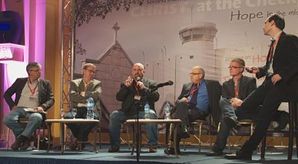 __Just as the annual ‘Israel Apartheid Week’ campaign hit college campuses across North America, Palestinian Christians hosted conference in Bethlehem that some Messianic Jews say conveys many of the same messages and aims to delegitimize Israel.

What makes this “Christ at the Checkpoint” conference unusual is that it is largely an initiative of Christians from the evangelical movement, whose ranks traditionally have held favorable views on Israel.

The annual “Christ at the Checkpoint” conference was first launched in 2010 at the initiative of the Bethlehem Bible College, an evangelical institution established by local Palestinian Christian clerics and educators.

“We recognize and are deeply concerned with the struggle of Palestinian Christians. What we object to is a conference that is explicitly pro-Palestinian and anti-Israel, which seeks to promote itself as a conference on peace and reconciliation,” the Messianic Jewish Alliance said in a statement.

Joel Hunter, pastor of Northland, A Church Distributed, in Longwood, Fla., attended the conference for only one day before flying home to attend a board meeting of the National Association of Evangelicals, of which he is a member. Hunter had an assigned talk on “a Western Reading of Scripture” which he said was meant to set up a dialogue on how the West and East needed each other with our complementary perspectives.

“I got in dozens of conversations and not one of them was hostile to Israel,” Hunter said. “In fact I heard just the opposite: that while there had been some injustice the last thing anyone needed was to make another enemy. Mostly the dialogue was to encourage and support Arab Christians who trace their history in the land back to Pentecost (Acts 2:11).”

Hunter said he heard a “balanced, compassionate approach to the hardship of Palestinian Christians and the real security needs of Israel.”

Hunter added: “The people who live in the land are very practical. The overwhelming majority of Jews, Christians and Muslims too are just looking for a way to live together in peace. Extremist rhetoric from any group will hurt the well-being of all groups.”

Many of the core sponsors and speakers at that initial “Checkpoint” gathering were previously involved in events held under the auspices of the Sabeel Center, directed by local Anglican canon, Rev. Naim Ateek.

According to the International Christian Embassy in Jerusalem, it appears that these evangelicals have made a conscious effort in recent years to distance themselves from their past associations with Sabeel and to offer a forum more appealing to a wider evangelical audience. Ateek was a speaker at the inaugural 2010 Checkpoint gathering but has not been invited back since.

Critics of Sabeel say it has espoused a radical brand of Palestinian Liberation Theology that would seek to justify violence by the “oppressed” Palestinians against the “oppressor” Israel on biblical grounds. In one sample of his radical rhetoric, Ateek once told followers in an Easter message: “In this season of Lent, it seems to many of us that Jesus is on the cross again with thousands of crucified Palestinians around him. It only takes people of insight to see the hundreds of thousands of crosses throughout the land, Palestinian men, women and children being crucified. Palestine has become one huge golgotha. The Israeli government crucifixion system is operating daily. Palestine has become the place of the skull.”

The International Christian Embassy in Jerusalem sees the annual “Christ at the Checkpoint” conferences as a bid by local Palestinian clerics and their allies abroad to move away from Sabeel and offer a message more appealing to evangelicals. This has included an effort to invite new voices into the conference more supportive of Israel. This year’s roster of speakers, for example, includes Rev. Wayne Hilsden of the King of Kings Community fellowship in Jerusalem and two local Messianic Jewish leaders.

Still, International Christian Embassy in Jerusalem argues these voices will likely be drowned out by the overwhelming chorus of Israel critics at the conference, and the thrust of Christ at the Checkpoint 2012 will remain largely a one-sided message based on a deeply flawed historical narrative of the Israeli-Palestinian conflict and highly suspect theology.

“The Messianic Jewish community worldwide, standing in the place of our forefathers Abraham, Isaac, Jacob, and the prophets and apostles who authored the Scriptures, view the modern re-emergence of supersessionism/replacement theology as a serious theological error, which has fueled anti-Semitism throughout history,” wrote the Messianic Jewish Alliance of America. “It needs to be exposed and rejected by Christians worldwide. This theology, if left unchallenged, will eventually result in the continued suffering and persecution of our Jewish people, whether inside or outside Israel.”

However, Hunter disagreed with this assessment: "I heard no one talking about “replacement theology” though I did hear that there were a few there who were in that camp,” he said. “That was not the gist of the conference at all or I would not have been there.”

Another pastor who attended was Wayne Hilsden of King of Kings church in Jerusalem. Hilsden’s participation in Christ at the Checkpoint is still being hotly debated in some Messianic circles in Israel. Nearly all agree that he spoke light in a dark situation, and did so with grace, but many fear he is being made a fig leaf for the anti-Zionist message of the conference organizers and the majority of the speakers.