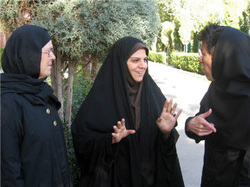 Mennonite Central Committee (MCC) organized the trip, and MCC's representatives for Iran, Cindy and Daryl Byler, accompanied the delegation. Iranian university officials expressed particular interest in academic exchanges related to peace, justice, conflict and religion, according to several members of the delegation. Sommer said she hopes that such exchanges can contribute to peace between Iran and the U.S. despite high tensions between governments. She noted that many Iranians fear a military attack by the U.S. or its allies, and many Americans would be afraid to travel to Iran. "There's nothing scary about going there," she said.

The delegation's visit is part of MCC's ongoing work to build relationships between people in Iran and the West.

MCC began working in Iran in 1990 by helping to provide relief after an earthquake killed more than 30,000 people in the northwest of the country. For the past ten years, MCC has co-sponsored a student exchange program with Iran's Imam Khomeini Education and Research Institute. Through this exchange, two Iranian scholars have done doctoral work at the Toronto School of Theology, and four American couples have studied Farsi and Islam in Qom.

The delegation visited a total of 12 universities and research centers and laid preliminary plans for an academic conference with Mennonite and Shia Muslim scholars in the city of Qom, Iran, in May 2009.

Huebner said that Iranian educators are particularly interested in fostering future interactions between Iranian and North American students. Part of the rationale is to combat harmful stereotypes between Iran and the West.

"They repeatedly emphasized that our students are the next generation, and 'Do we want to perpetuate stereotypes or break them down?'" Huebner said.